Unlocking the Secrets of the Electron Diffusion Region 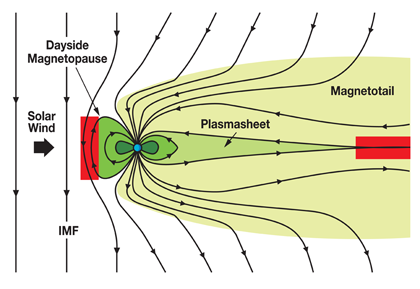 The overarching goal of the MMS mission is to measure the plasma and the electric and magnetic fields inside the diffusion regions of Earth’s magnetosphere in order to answer the following fundamental open questions: 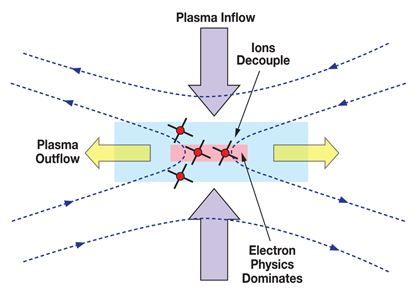 The MMS Mission exists to measure the speed and variability of an important process known as magnetic reconnection, and to relate them to boundary conditions and internal conditions within the electron diffusion region. The electron diffusion region (EDR) is small and fast moving, so MMS is specifically designed to maximize the time or spatial resolution available during its passages through the EDR. The EDR is three dimensional and must therefore be studied with a tetrahedral array of four identical spacecraft.

Reconnection is the general term for magnetic field disconnection or connection, either of which may release energy stored in the magnetic fields. The rate of reconnection is measured by the amount of magnetic flux converted from closed to open for disconnection, or vice versa for connection. Large variations of the rate are observed or inferred, but without detailed observations of the EDR, it has been impossible to predict this rate or its variations. MMS will provide the needed observations for the first time.